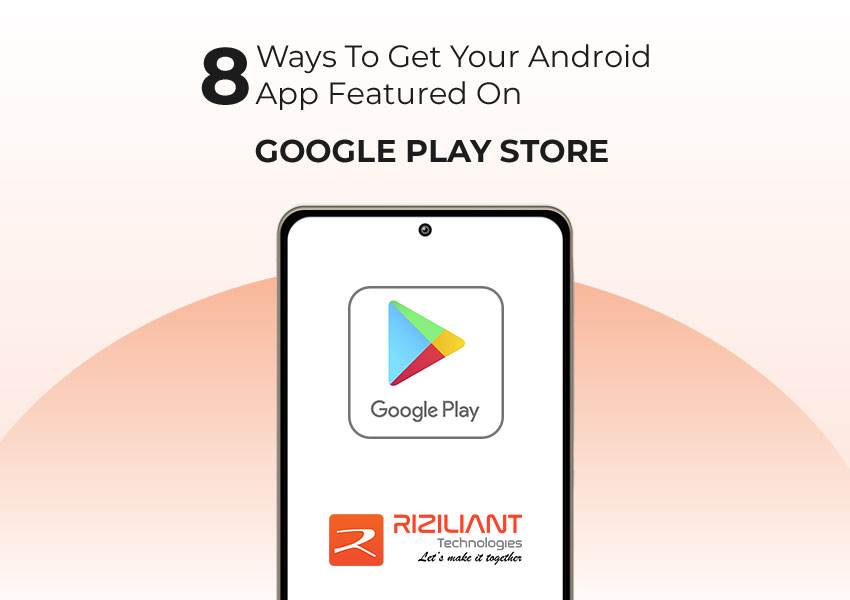 If you want to get your android app featured on the Google Play Store it might seem like a challenging task for you. You can follow these techniques and strategies to get featured and maximize your apps.

Nowadays being succeeding and being featured on the play store is a vital role for your business and app.

Your task is to make sure your app gains a better reputation and popularity and millions of downloads don’t stop.

If you cannot consider the low-quality apps, but there are still more than 2.2 million apps to compete in order to get app features on the play store.

There are certain methods such as user interaction and visual design, latest technologies, localizations, that help your app to feature on the Google Play store.

Getting featured on your app on the play store can benefit your app to an extent and increase the attention of users.

There are some of the best methods that we are describing in our blog, that can help your app earn recognition.

It’s also important to have more downloads, more users, interesting apps, and more fans around the world to be on one of these lists.

Google hasn’t set any specific rules and guidelines for displaying apps, there are several ways to increase the chances of your app appearing on the Play Store. After uploading the app on Play Store, now is the right time to display it on Play Store. Keep blog reading continue…

What does it mean to be a featured app on the Google Play Store?

Besides earning points and improving your app’s online presence, there are multiple benefits to getting your app featured.

When it comes to getting the word out for the superiority of your Android app in terms of performance, apart from appearing on Google Play, there are many features and options offered to you by Google. Popular apps can be classified into one of four types:

How to make an app featured on the Google Play Store? A step-by-step process.

You will get the answer to all these things in this blog after publishing the app on Google Play Store. If you achieve global exposure on Google Apps Store, please read the blog carefully. Here we have told you about some important steps which are as follows.

App Store Optimization is a well-known technique among all the top Android app development companies.

App Store optimization covers activities that target those aspects that can generate greater visibility of your application on the App Store.

ASO technology is focused on increasing the conversion rate of impressions into downloads on the app.

Many points are taken care of in App Store Optimization. In this, you have to answer basic questions of the user, such as what problems they are facing in using the app. How can their problems be solved?

Describe the solutions to the user problems completely. Along with describing the basic functions, mention how the app will affect the daily life of the user. What are the title and description of the app?

App search optimization relies heavily on the use of proper key phrases or keywords in the description.

Social media is the best medium to get the high popularity of your application. In fact, 42% of the world’s population using social media is enough to justify this statement.

Social media guidelines are different for all types of online products and promotions.

Recognizing the vast number of Android users spread across the globe, apps that are not tied to any particular geographic location perform exceptionally well on the Google Play store.

An app that is multilingual in nature and contributes to an immersive experience for users from different cultures of the world earns a distinct advantage over others.

Before launching your Android app, send press releases to relevant online publications. Media marketing is the best method to build hype and backlinks for your app. The hopes are not over for grabbing media attention. Contact journalists when you launch a new app or release a major update.

Press Release is another way through which you can promote your app. Your app will get headlines and many publications will cover your app release which will eventually allow your app to reach a wider user base and develop an authentic connection. It is a great product to show users what they expect.

The best way to target huge audience attention is with the help of influencers to increase downloads and get more attention to your app.

Influencers already have a hold of your target audience. By collaborating with them, you can increase the reach of your app manifold.

You can build an arsenal of quality backlinks. Ask a blogger to use your app and write a review, or do something more creative.

For example, partnering with bloggers. Google will recognize the buzzing around your app on the Internet. And will help you to come up in the search engine.

Pay as much attention to yourself or the maintenance of the game as possible. Read the reviews of the users and find solutions to their problems.

If you do this at the right time, it will have a good impact on your users. Which will help you in increasing the number of your users.

You need to maintain your app efficiently and update it constantly keeping in mind the issues faced by the users.

Maintaining something is a continuous act rather than a one-time thing. So, make sure you keep your app updated with the latest tech and fix whatever needs to be fixed.

The best rating means best ranking. This brings us to the important point while improving app ratings. If your app rating is poor, Google will not display your app.

This is the harsh truth. Most people don’t want to install apps with bad ratings. Google downloads more apps with good ratings than apps with poor ratings.

The higher the installation, of course, the worse the rating. This has a huge impact on your users. Many experts believe that most users rely on app reviews and ratings to decide which application to install.

Thus, for any app to get a good ranking, it should aim for more positive reviews. You can do this by a call to action. It allows users to leave comments easily.

Know what not to do

When it comes to mobile design and development it is enough to tell you in very specific terms what your audience will like and dislike.

These are the topmost priorities that it wants developers to keep in mind to achieve a certain consistency across the App Store so that the app runs smoothly and doesn’t take up much space.

Apps where the action bar is near the top of the screen perform better on the Play Store. The second thing is that no one should take any decision in water.

This can narrow down your audience. Whatever you do, do it thoughtfully. If you want, you can take the advice of Riziliant Technologies Digital Marketing Experts.

In this blog, we have discussed how to make your app appear on Google Play Store and App Store? Hope this was helpful in guiding you through the process of how to draw an app. Once the app is uploaded to the App Store, you need some effort and some digital marketing activities and strategies to make it successful. At Riziliant Technologies, we have an expert team that can help you choose the best app marketing strategy for your Android App Store.